One of the ‘old timers’ in the online lottery syndicate world, ‘Play Lottery’ (previously known as ‘Big Fat Lottos’) provide a range of syndicate options to suit UK players. 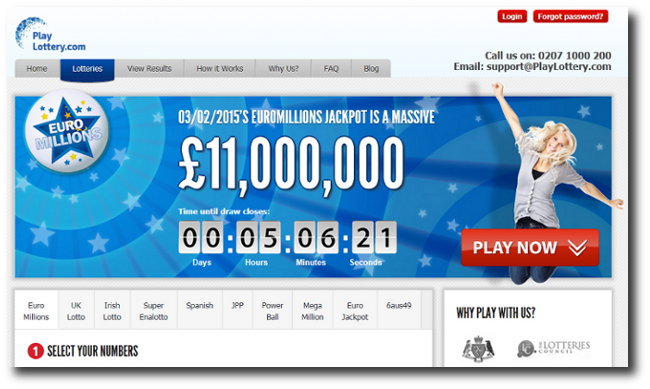 There are groups for our old favourite the UK Lotto, and the hugely popular EuroMillions.

But they do also offer groups for all of these games too:-

And yes, their Spanish groups do include the insane once a year ‘Chistmas El Gordo’. The one with the prize fund counted in BILLIONS, not just mere millions!

UPDATE: You can now also play the big Powerball and Mega Millions games from the USA too.

There is also something called ‘Jackpot PowerPlay’ which is kind of a blend of the others, and is designed for those that prefer lots of big games instead of maximising their chances.

The EuroMillions syndicates bet on both weekly draws (Tuesday/Friday), with groups sharing 55 bets per each draw, making 110 per week. This costs a reasonable £5.95 per week to play.

Group sizes are set at 130 people, which is a bit too high for my liking, but can still make you a millionaire when those big rollovers hit.

IMPORTANT: the ‘UK Lotto’ groups are now ONLY open to players outside of the UK.

Why we’re not sure, but that’s the rules folks. If you’re in the UK, choose EuroMillions or one of the other options instead.

This group is twice a week, for the Wednesday and Saturday UK Lotto draw. Each group shares 44 syndicate bets every draw, giving 44 times the chance of winning. And making 88 in total, for a cost of £5 per week.

The groups are made up of 88 people each. So if you took a typical jackpot to be around £5 Million, that would be £56,000 each. If that’s not enough, then maybe cross your fingers on a big £20 Million rollover week, or choose EuroMillions instead 🙂

The Irish Lotto is a different approach for ‘Play Lottery’. Normally they choose games with huge jackpots, but this time have gone for one with much easier odds of winning instead.

Your chances of winning the Irish Lotto are about 1-in-8 million, about 20 times better than EuroMillions for example. But the jackpot is of course a lot smaller starting at €2 Million.

The groups bet on both weekly draws, Wednesday and Saturday, and play 40 syndicate bets on each. Groups are made up of 100 people each, costing £5 per week to play.

Spanish Superdraws works a bit differently as it only bets on one draw per month. But what draws it plays!

Most of us in the UK have heard of the Christmas El Gordo which typically has a prize fund of over €2 Billion, with tens of thousands of prizes paid out.

But Spain actually runs similar draws every month of the year. Not as big, but the January El Nino draw is still huge (€840 Million). And even the rest only get as small as €80+ Million.

The cost is £20 per month, with groups buying 10 bets per draw and sharing prizes between 50 people. Tickets for these draws cost €20 each in Spain.

This mega-draw is a very big deal in Italy, but not at all well known in the UK. (I’ll happily admit, I’d never heard of it before!).

The odds are terrible but the Italians love it because it rolls over so much and creates vast jackpots. It’s hit €177 Million before!

SuperEnalotto groups bet 3 times a week buying 85 syndicate bets every draw, and sharing winnings between 85 players. The cost is £6 per week.

I personally prefer EuroMillions as the prizes are frequently as big, and the odds better.

As I mentioned above, this is a blend of some of the other games. You bet on 2 EuroMillions draws, 2 UK Lotto draws and 3 SuperEnalotto draws every week. You share 30 syndicate bets in every draw played.

It costs £5 per week, and groups are formed of 210 players. You get less bets per game with this option of course – because the idea here is to cover more games for the same money.

Joining online is secure and pretty easy. Just tick the boxes to select the numbers for the group you’d like to play in and enter your details. 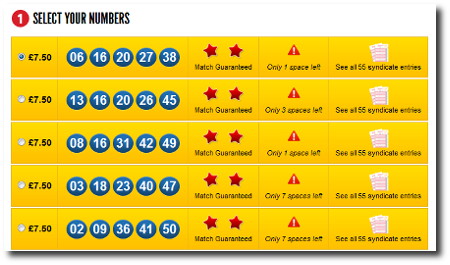 ‘Play Lottery’ accept all the usual debit and credit cards. It’s all very easy, but there’s also a prominent phone number you can call too if you need any help. Which is nice.

How About My Winnings?

All members have an online wallet for their winnings. The small wins can build up until you’re ready to withdraw them.

There are no charges for withdrawing winnings. And you can easily request a withdrawal online at any time. This can be credited directly to your bank account (works great!), or can be paid by Cheque or Moneybookers.

The prices could be cheaper, but then you are getting a real professional company managing everything for you. And that doesn’t come cheaply.

Why Play With ‘Play Lottery’?

They have made it all pretty easy. And they are a professional company who you can talk to on the phone.

My personal favourites for maximising your chances are the UK Lotto and EuroMillions syndicates. It’s also hard to resist at least the Christmas El Gordo too, just as a total punt.

But if you prefer lots of games, then take a look at the Jackpot PowerPlay groups.

← Back To The Lottery Syndicate Reviews
Like this page? Please help others by sharing. Thanks in advance :-)